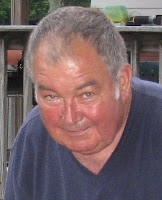 Richard “Dick” Crane, 75, of New Paris, went to be with his Lord on March 23, 2012 at his residence. Dick was born May 8, 1936 in Liberty, Indiana the son of the late Raymond and Anna Bernice (Beetem) Crane. In addition to his parents, Dick is preceded in death by a brother, Raymond Crane, Jr. Dick graduated from Jackson High School in Campbellstown, Ohio and also attended Sinclair Community College. Over the years Dick worked at many places. He was a General Foreman for American Aggregates, a Superintendent for Middleboro Stone Company in Richmond, Bus Transportation Supervisor at Anthony Wayne and Wayne Industries and most recently was employed by Darke County Health Department until he retired. He was a member of the Darke County Fish and Game Club. Dick also proudly served our country in the United States Army. Dick had many hobbies. He loved to go camping and make buttermilk pancakes for breakfast. He loved to play poker, go fishing and search for treasures with a metal detector. Dick also enjoyed woodworking. He would build birdhouses and donate them to different organizations to auction off. He was an avid coin collector. Dick loved square dancing and he took classes to become a square dance caller. While he was involved in square dancing, he met his wife, Sandy Sandlin who survives him. Also surviving are his sons and daughter-in-laws, Jeffery Allen & Debbie of Greenville and Norman Lee Strader of Cora Peake, North Carolina; daughters and sons-in-laws, Kimberly and Allen Marshall of North Vernon, Indiana, Melina & Mark Kuhbander of New Madison, Misty (Strader) Law, of Richmond, Indiana, Amy and Rob Campbell, of New Madison, and Cassandra Crane of New Paris; 14 grandchildren; 6 great grandchildren; brothers and sisters-in-law, Ronnie & Sue Crane of Florida, Mervin & Dorothy Crane of Richmond, Indiana, Jerry Crane of Indiana, David Crane of Richmond, Indiana; a sister, Carolyn Berry, Richmond, Indiana. A Celebration of Life will be held on Tuesday, March 27, 2012 at 7:00 pm at Braund Funeral Home with the Rev. Tony Price officiating. The family will receive friends and guests beginning at 5:00 pm until the time of the service. Burial will be at the convenience of the family. Memorial contributions may be made to the family. Services are entrusted to Braund Funeral Home in New Madison.