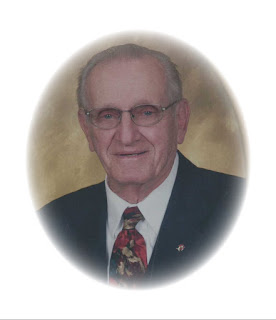 Paul L. Kochersperger, age 91, of Gettysburg, Ohio, passed away on Tuesday, February 28, 2017 at 12:28 AM at Rest Haven Nursing Home, Greenville, Ohio. He was born on August 8, 1925 in Mississinawa Township, Ohio, to the late Wilbert H. & Adah (Sheffer) Kochersperger.

In addition to his parents he is preceded in death by his brother, John Kochersperger and sister, Doris Bridenbaugh.

Paul was a member of St. John Lutheran Church in Greenville, Treaty Squares, Gettysburg Masonic Lodge #477, Antioch Shrine of Dayton and Scottish Rite Valley of Dayton. He was a member of the United States Navy serving in WWII where he was a Plank Owner of the USS Charles R. Ware. Member of the American Legion in Greenville and Order of the Eastern Star chapter 307. Paul worked as a maintenance welder for General Motors retiring in 1986 after 39 years of service. He was the Street Commissioner in Gettysburg for 20 years, served on the Gettysburg Fire Department from 1953 to 1986 and was an EMT for Gettysburg Rescue. He enjoyed riding his Gold Wing and traveling and camping with his family.

There will be a service held on Saturday, March 4, 2017 at 10:30 AM at St. John Lutheran Church, 7418 St. Rt. 121 N., Greenville, Ohio, with Pastor Brian McGee officiating. Burial will follow in the Gettysburg Cemetery, Gettysburg, Ohio, where there will be a Military Graveside Service conducted by the Greenville Veterans Honor Guard. Family will receive friends on Friday, March 3, 2017 from 5-7 PM at Zechar Bailey Funeral Home, Greenville, Ohio, as well as one hour prior to the service at church.

A Scottish Rite Ring service will be conducted on Friday at 6:45 PM at the funeral home.

It is the wishes of the family that memorial contributions be given to St. John Lutheran Church or Children’s Shriners Hospital. Condolence for the family may be sent through www.zecharbailey.com