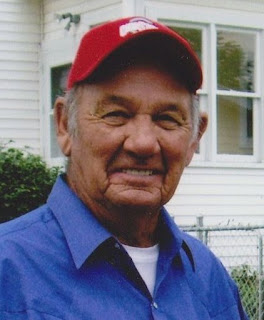 James H. “Jim” Wilson, age 84, of Greenville, Ohio, and spent winters in Okeechobee, Florida, passed away peacefully on Saturday, March 19, 2016 at his residence in Florida. He was born on June 13, 1931 in Darke County, Ohio, to the late Damon & Helen (Halderman) Wilson.

In addition to his parents he is preceded in death by his wife, Eleanor “Ellie” Wilson; son, Michael L. Wilson; and brother, Thomas Wilson.

Jim was the owner and operator of Peoples Livestock and Wilson Brothers Livestock market in Greenville along with being a farmer his entire life. He was a member of the United States Navy serving in the Korean War on the U.S.S Taluga. He was a lifetime member of the Greenville Veterans club and an avid fisherman in Canada and Florida. Jim was inducted into the NTPA Hall of Fame in 2015 and loved spending time with his family.

There will be a graveside service held on Tuesday, April 5, 2016 at 1:00 PM at Greenville Cemetery, Greenville, Ohio, with Pastor Terry Haworth officiating. The Greenville Veterans Honor Guard will be conducting a Graveside Military Service. Arrangements are under the direction of Zechar Bailey Funeral Home, Greenville.