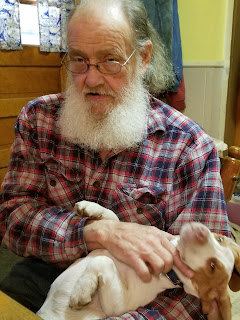 He was born on October 21, 1957 in Marietta, Ohio to the late Charles and Margaret (Gamary) Morland.

In addition to his parents, John was preceded in death by several aunts, uncles and cousins.

John served his country honorably in the United States Army and was a member of the DAV and the American Legion Post 526. After leaving the Army, John worked many jobs; he worked in the oil fields, operated heavy equipment, hauled equipment and drove truck. His last job was as a fabricator for Twin City Fans. John also enjoyed volunteering for the Special Olympics.

He loved the outdoors and could be considered a true outdoorsman. He enjoyed horseback riding, camping, hunting and fishing. Though he would occasionally come home empty-handed, John still loved being out with his buddies hunting. Sometimes the only "turkeys" they would see would be themselves. John loved his family and was always there for them. He was help with any project or hobby as long as it meant spending time with his children and grandchildren. John was a simple man who and lived a simple life, but his impact on the world around him and those who knew him was extraordinary.

Family and friends may visit on Wednesday, March 27, 2019 from 5:00 PM to 7:00 PM at Tribute Funeral Homes, Greenville Campus. Military honors, provided by the Greenville Honor Guard will be held immediately following the visitation at 7:00 PM

Memorial contributions may be made to Tribute Funeral Homes to help assist with the final expenses.