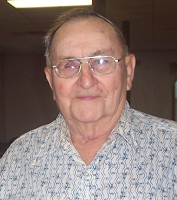 Jim was a member of the United States Army and retired from the Darke County Garage.

There will be a service held on Wednesday, March 6, 2013 at 10:30 AM at Bailey Zechar Funeral Home, Versailles, Ohio, with Pastor Gill Krouse officiating. Burial will follow in the Greenville Township Memorial Gardens, Greenville, Ohio. Family will receive friends on Tuesday, March 5, 2013 from 5-7 PM at the funeral home.