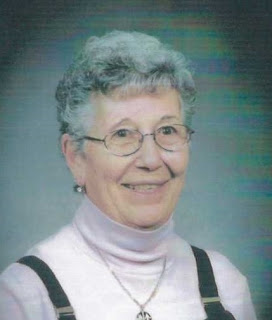 Virginia Louise Keller, age 89, of Greenville, Ohio, went to be with the Lord on Wednesday, November 2, 2016 at Miami Valley Hospital, Dayton, Ohio. She was born on Feb. 8, 1927 in Arcanum, Ohio, to the late Cleo & Estie (Fitzwater) Brumbaugh.

In addition to her parents she is preceded in death by her first husband, Robert E. Bruner; son, Larry Joe Bruner; daughter, Karen Sue Bruner and brother, Don Brumbaugh.

Virginia was a member of St. Paul Lutheran Church in Greenville, Ohio. She was a previous member of First Presbyterian Church where she was an Elder and served on the Stephen Ministry. She also was involved with the Mission Committee where she traveled on 6 mission trips. Virginia retired in 1978 from Fram after 25 years of service. She also was a LPN until 1997 and worked at the Brethren Retirement Community for 10 years. She loved crocheting and square dancing.

There will be a service held on Saturday, Nov. 5, 2016 at 2:00 PM at St. Paul Lutheran Church, Greenville, Ohio, with Pastor Peter Menke officiating. Burial will follow in the Stelvideo Cemetery, Stelvideo, Ohio. Family will receive friends from 12:00 PM until the time of the service at the church. Arrangements are under the direction of Zechar Bailey Funeral Home, Greenville, Ohio.

It is the wishes of the family that memorial contributions be given to the donor’s choice. Condolences for the family may be sent to www.zecharbailey.com