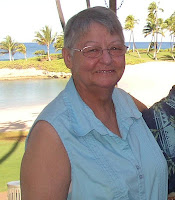 Frances Rosetta (Fiste) Hubler, 66, of Phillipsburg, Ohio, passed away peacefully with her loving family at her side on the morning of June 18, 2012. Fran was born on November 4, 1945 to the late Benjamin Franklin and Matilda Frances (Trapp) Fiste.

Fran enjoyed gardening, sewing, finishing furniture, knitting, bowling and canning beets and salsa among other things. She worked at a plastics factory and a military boot factory during her life, and was a seamstress. Her greatest enjoyment in life was spending time with her family.

In addition to her parents, Fran is preceded in death by two sisters, Cora Evans and Sandra Penny; and a brother, Lewis Fiste.

The family will receive guests on Wednesday, June 20, 2012 from 5 – 8 PM at Braund Funeral Home in New Madison. In addition, a Celebration of Life service will be held on Thursday, June 21, 2012 at 10:00 AM with Pastor Ty Blake officiating. Burial will follow in Greenmound Cemetery. The family request memorial contributions to be made to the American Cancer Society or Hospice of Dayton.