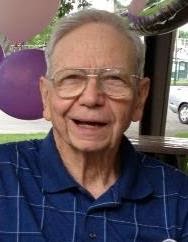 Tom is survived by his wife, Lois (Cameron) Singer of Greenville, Ohio, whom he married on September 12, 1953; son and daughter in law, Thomas A. & Pam Singer of Greenville; daughters and sons in law, Susan & Cliff Hampshire of Union City, Ohio and Nina & Mark Lewis of Venedocia, Ohio; 9 grandchildren; 20 great grandchildren; 1 great great grandson; sister, Marge Middleton of New Madison; sisters in law, Caroline Singer of Palestine and Ruby Singer of New Weston; as well as numerous nieces and nephews.

In addition to his parents he was preceded in death by his sister, Marie Thwaits and brothers, Roy, Ben, Carl and Bob Singer.

Tom was a member of Nashville United Methodist Church and a graduate of Jackson High School. He served in the United States Army from 1950-1952 and retired from Fram in 1994.

There will be a service held on Saturday, May 10, 2014 at 11:30 AM at Nashville United Methodist Church, 5984 Palestine-Union City Rd., Greenville, Ohio (Nashville), with Pastor Chuck MacKeen officiating. Burial will follow in the Palestine Cemetery, Palestine, Ohio. Family will receive friends one hour prior to the service at church. Arrangements are under the direction of Zechar Bailey Funeral Home, Greenville, Ohio.

It is the wishes of the family that memorial contributions are given to Nashville United Methodist Church or Smile Train (www.smiletrain.org).