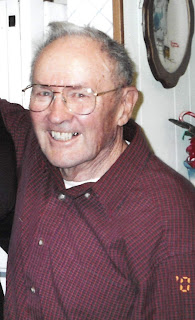 He was born on December 20, 1923 in Dayton, Ohio, to the late Dwight Holloway and Mabel (Ayers) Holloway-Davis.

In addition to his parents, Carl was preceded in death by his beloved and devoted wife of 67 years, Eleanor June (Leffler), who died July 29, 2015; his stepfather, Red Davis; his brother Wilford Holloway, who was killed in action November 1, 1944 in WWII and laid to rest in Lorain, France; his sister Janet Snodgrass; his brother Richard Holloway.

He started as a Machinist Helper out of high school at Valley Machine Tool Company, Dayton. He Carl was a PFC in the United States Army from 1943 to 1946, serving in the Asiatic Pacific during WWII. He then returned to Dayton and worked at Carleton R Elliott Corp. and was certified as a Model Maker IV, but later transferred to Race Tool and Mold in Dayton. He retired as a Tool and Die Maker from Dayton Reliable Tool and Die in 1994 and continued to enjoy playing golf and cards with many good friends through the years.

Military funeral honors will be conducted at the Dayton National Cemetery on Friday, October 12, 2018 at 9:30AM.

The family will receive friends on Thursday, October 11, 2018 from 5PM to 7PM Tribute Funeral Home - Greenville Campus. Full Military Honors will be conducted Thursday at 7PM by the Greenville Veterans Honor Guard. Burial will be in the Dayton National Cemetery at 9:30AM Friday.

In lieu of flowers, memorial contributions may be made to State of the Heart Care, 1350 N. Broadway Street, Greenville, Ohio 45331.
Newer Post Older Post Home