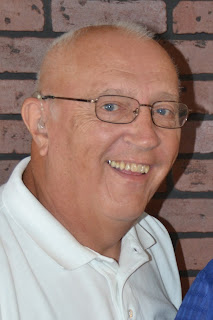 Bob worked for NCR in Dayton for 41 years before “retiring”. He loved to sing and had a beautiful voice. He enjoyed Karaoke and singing at nursing homes with Darrin and Terri, something they called Nursing Home Ministries. Bob had an amazing sense of humor and was always telling jokes, usually bad ones. He loved all types of sports and enjoyed bowling and golfing. Bob is known by his family as “Mr. Fix-it”. He was a homegrown engineer who would and could fix just about anything. Bev never got anything new because Bob would just fix whatever broke. He loved working with his hands and working with wood in his workshop.

Bob held many titles, performed many duties, but none more important than Grandpa. He loved and adored his grandchildren. He would never miss any event they were involved in; anytime, anywhere. If they were doing it… he was there.

A Celebration of Bob’s life will be held at 5PM on Tuesday, October 9, 2018 at Tribute Funeral Homes, Greenville Campus, with Rev. Eric Fee officiating. Burial will take place at the convenience of the family in Greenmound Cemetery.

Family and friends may visit on Tuesday, from 3PM until the time of the service at the funeral home.