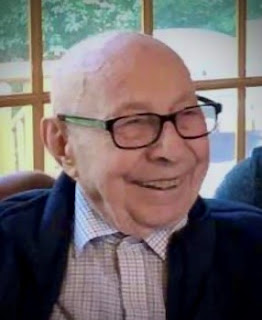 In addition to his parents, Jesse is preceded in death by his beloved wife, Fern H. Heise, whom he married on June 15, 1951; and his brothers, Alvin, Willard, Howard, and Loren.

Jesse was born and raised on his family’s farm during the depression. During World War II, Jesse was drafted and joined the Civilian Public Service where he worked in a conservation camp and then at a hospital in Marlboro, New Jersey. After the war, Jesse graduated from Goshen College with his bachelor’s degree in chemistry. He then graduated from medical school at the University of Cincinnati. In 1953, Jesse established his medical practice in Pitsburg with his office set up as an annex to his home. In 1963, he moved his office to Arcanum and continued to practice medicine until his retirement in 2000. He then went on to do substitute teaching at FM for another 10 years. Much to his surprise, he was inducted into FM’s National Honor Society during that time.

Jesse served on many church and civic boards. Some of which include the Franklin Monroe School Board, Pleasant Hill Brethren in Christ Church and Messiah College Board of Trustees among others. Jesse and his family gave a year of service at Macha Mission Hospital in Zambia, Africa in 1968. Few are aware, but he was also given the honor of being made a "Kentucky Colonel". He achieved much but was a humble man who served God with reverence and gratitude. Once his professional life ended, he continued to serve and bring joy to others by playing his harmonica for them.

Jesse loved people of all ages, and was often greeted warmly as simply “Doc.” He was an encourager and frequently sent postcards, comics and letters to anyone who came to mind. He did not complain or speak negatively about others. He was gentle and grateful to the end of his life

Jesse had a passion for trees and nature which he enjoyed sharing with others, often walking the many trails he groomed at the farm. He loved music and often would sing songs he remembered from his “one-room school house” days in Kansas. He had a fantastic sense of humor and laughed easily. He loved his family and was dearly loved by them. He encouraged all to “be kind” and lived kindness. Jesse put his trust in Jesus Christ and often encouraged others to trust in Him pointing them to Gods Word. He had a heart for those who were hurting.

A private family service will take place due to the current COVID-19 pandemic. Burial will follow in Pleasant Hill Cemetery.

Online condolences and Hugs-From-Home may be share with the family by visiting www.tributefuneralhomes.com.