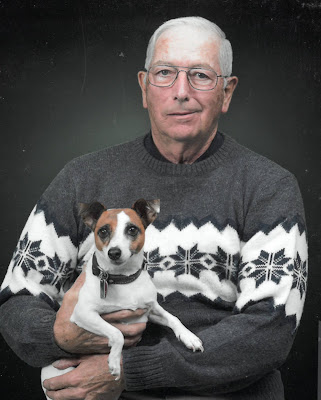 He was born on September 29, 1940, in Morgantown, West Virginia, to the late William and Muriel (Sponaugle) Marshall.

In addition to his parents, Bill was preceded in death by his wife, Calva Jean (Snyder) Marshall, whom he married on May 30, 1962.

Bill graduated from West Virginia University with his degree in Agriculture Education. He spent over 33 years as a Vo-Ag teacher until he retired in mid 1990s from Tri-Village High School. After retirement, he went to work for Lowes in Richmond and enjoyed keeping in touch with his previous students over the years. Bill loved his community and helping others. His passion for gardening and horticulture showed through his giving nature of his garden’s produce. It was not uncommon for Bill to give his produce away and anyone and everyone. During the winter Bill would use his tractor to plow snow for others throughout town.

Bill was an active member of the New Madison Kiwanis Club for over 55 years. In fact, he even had perfect attendance thought the years. He loved to help at the sausage barn at the Darke County Fair and go through the barns and support the Jr. Fair kids during the fair auctions. If he was not at the sausage barn, he could be found in the Vo-Ag building at the fair. Bill was also a member of the New Madison Volunteer Fire Department until he retired in the early 2000s. Bill served on the town water board for over 20 years and was even certified as a water treatment technician. He was a proud member of the NRA. Bill and his wife, Jean, were active members of the New Madison United Methodist Church, where they both faithfully attended each Sunday.

He loved to be outdoors and was an avid deer, rabbit and squirrel hunter and liked to go fishing. When he was not in New Madison, Bill liked to go to West Virginia and root for the West Virginia University Mountaineers football team. He liked to listen to 700WLW and the Cincinnati Reds. Bill was proud of his family and enjoyed spending time with his grandchildren, great granddaughters, and the neighborhood kids who called him, “Mr. Bill.”

Bill is survived by his children, David Marshall and his wife, Patty, of Verona, Ohio, and Fred Marshall and his wife, Shannon, of Sand Fork, West Virginia; his grandchildren, Michael Marshall of New Madison, Taylor Flanders and her husband, Brian, of Middletown, Ohio, and Dalton Marshall of Brookville, Ohio; his great grandchildren, Gabriela Nickole and Raelyn Grace Marshall; his siblings, Myrna Peters and her husband, Carl, of Silver Spring, Maryland, Marilyn “Pug” Evans of Palm Coast, Florida, and Richard Marshall and his wife, Mary, of New Madison, Ohio; his uncles, Ford Riffle and George Sponaugle, both of West Virginia; his two sisters-in-law; and numerous nieces, nephews, and cousins.

A celebration of Bill’s life will take place at 7:00 PM on Wednesday, October 7, 2020, at the New Madison United Methodist Church in New Madison with Pastor David Richey officiating. Bill will be laid to rest with his wife in Snyder Cemetery in West Virginia at a later date.

Guests may visit with Bill’s family on Wednesday from 4:00 PM until the time of the service at 7:00 PM at the church.

The family would like to thank the nursing staff at Miami Valley Hospital’s 6th floor heart ward, Wayne HeathCare ER, the State of the Heart Care, and Tri-Village Rescue.

In lieu of flowers, the family request that memorial contributions may be given to State of the Heart Care, 1350 N. Broadway, Greenville, Ohio, or the New Madison United Methodist Church.