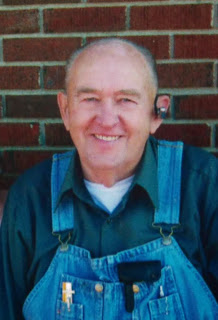 He is survived by his wife Jean Emrick of Greenville, Ohio, whom he married on May 3, 1969; son and daughter in law, Keith & Pat Hall of Greenville; daughters and sons in law, Becky & Jeff Albritton of Greenville, Sherry (Toby Miller) Savage of Bradford, Ohio, and Patricia & Jeff Miessen of Indianapolis, Indiana; several grandchildren and great grandchildren; 4 brothers; 2 sisters; as well as numerous nieces and nephews.

In addition to his parents he is preceded in death by his son Ricky Hall.

Donald retired from Corning after 42 years of service and was also a farmer. He enjoyed golfing, model trains, garden tractors and was a member of the Kingdom Hall of Jehovah’s Witnesses.
There will be a service held on Wednesday, October 9, 2013 at 2:30 PM at Zechar Bailey Funeral Home, Greenville, Ohio, with Robert Alspaugh officiating. Burial will follow in the Ansonia Cemetery, Ansonia, Ohio. Family will receive friends on Wednesday from 12:30 PM until the time of the service at the funeral home.
It is the wishes of the family that memorial contributions be given to the Kingdom Hall of Jehovah’s Witnesses, 6688 Ludy Rd., Greenville, Ohio 45331.