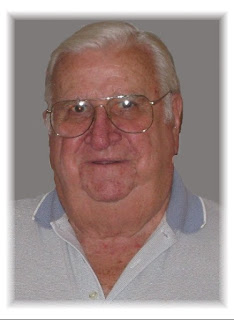 Delmer Gene Batten, 91 of Greenville, OH passed away after a lengthy illness on June 21, 2015 at Wayne HealthCare, Greenville, Ohio.

Delmer was born in Greenville, OH on September 3, 1923 to Chester and Zema (Lephart) Batten and graduated from Greenville High School in 1941. Delmer was a World War II veteran having served with the 303rd Bomb Group (Hell’s Angels) as a flight engineer. He flew on 33 missions during his service including one in which the plane, landing 50 feet short of the runway, was severely damaged. Delmer was recognized for his service to our county and was awarded the Distinguished Flying Cross medal for heroism for his actions during that mission. Upon Delmer’s return from the war he met and married Betty Louise Swabb. Together they settled in Greenville, OH to raise their family while he worked for Schrader’s Giant Tire Company.

Delmer was a quiet man with a unique sense of humour and great love of his family. He was a member of the Abbottsville United Methodist Church, a Mason and a Shriner. After his retirement, Delmer also did volunteer work with the VFW Post in Greenville serving as Post Quartermaster and helping with bingo for several years.

He leaves behind his wife of 69 years Betty Louise Batten, their three sons Donald (Cheryl) of Versailles, OH; Edward (Judy) of Union City, IN and Randy of Leander, TX along with 3 grandchildren William (Lori) Batten of Springfield, OH, Jennifer Long of Newnan, GA and Benjamin (Kelsey) Batten of Muncie, IN and 6 great-grandchildren. Delmer also leaves behind brothers Larry of Versailles and Jerry (Glenna) of Arcanum as well as numerous nieces and nephews who will continue to celebrate his life as they mourn his passing. He was preceded in death by his parents, a brother Lloyd Batten, sisters Marjorie Cypher and Joann Cruze and granddaughter Shannon Batten.

There will be a service held on Saturday, June 27, 2015 at 10:30 AM at Abbottsville United Methodist Church, 4135 St. Rt. 49 South, Arcanum, Ohio, with Pastor Chris Harris officiating. Burial will follow in the Abbottsville Cemetery, Arcanum, Ohio. Family will receive friends on Friday, June 26, 2015 from 6-8 PM at Zechar Bailey Funeral Home, Greenville. There will be a Graveside Military Service conducted by the Greenville Veterans Honor Guard.

The family respectfully requests in lieu of flowers, memorial contributions be made in Delmer’s memory to the Abbottsville United Methodist Church in Abbottsville, Ohio or the charity of your choice.

We also wish to express our heartfelt gratitude to the nurses, physicians and staff at Rest Haven Nursing Home for the wonderful care and compassion they provided our Husband / Father / Grandfather during his residency there.