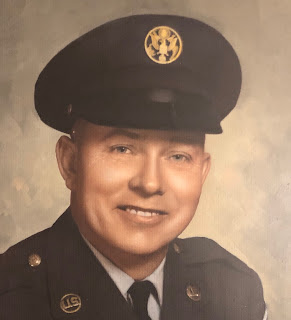 John H. Tinkle, 90, of New Madison, Ohio, previously of Ridgeville, Indiana, passed away peacefully on Sunday, January 20, 2019 at his home, surrounded by his family.

He was born in Randolph County, Indiana on July 15, 1928 to the late Henry O. Tinkle and Anna May (Willis) Tinkle.

In addition to his parents, John was preceded in death by his wife, Shirley Eileen (Wooters) Tinkle, whom he married on May 6, 1952; his brother, Cecil Alvin Tinkle; and his sister, Edna Bell (Tinkle) Champ.

John was known as Chief Master Sergeant Tinkle in the U.S. Air Force, where he served his country honorably for 21 years. After retiring from the service, John worked for Bales and Bowen Service Station in Albany, Indiana. He loved his family and enjoyed spending time with his grandchildren and great grandchildren. John’s love for flying continued after his Air Force career. He was a member of the American Legion Post 245 in New Madison and the National Museum of the US Air Force Society.

Private services will take place at the convenience of the family.

The family has entrusted Tribute Funeral Homes with the arrangements.

The family request that memorial contributions be given to the New Madison United Methodist Church or American Legion Post 245 or Tri-Village Rescue or the donor’s choice.