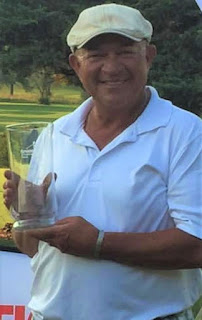 John L. Hershey, 59, of Greenville, Ohio passed away unexpectedly on Thursday, May 16, 2019 at Miami Valley Hospital North in Englewood, Ohio.

He was born on June 9, 1959 in Piqua, Ohio to Jack Hershey of Bradford and the late Brenda Hickman.

In addition to his mother, John was preceded in death by his brother, James “Kasey” Hickman; his step-father, Bobby Hickman; and his father-in-law, Jerry Koverman.

John was a 1977 graduate of Bradford High School. After graduation, he enlisted in the United States Navy, where he served his country honorably. John was an entrepreneur and a man of many trades. He loved having a good time and had a love for making other people smile. John enjoyed spending time with his family and friends.

When John was not working, you could find him on the golf course. He was an avid golfer and held a coveted professional golfers’ card. John also enjoyed playing softball. He enjoyed coaching local students in many sports and spent many years as a referee for basketball and an umpire for baseball and softball. He was a proud member of the Bradford’s Athletic Hall of Fame. He was a part of the Sons of the American Legion, a lifetime member of the VFW, and a member of the Greenville Elks.

John was a faithful follower of Christ and a member of St. Mary's Catholic Church in Greenville. His love for God could be found in his contagious smiles and actions. John so much appreciated life. He knew every day was a gift, and he would try to squeeze as much as he could into each 24-hour period. The last several years revolved around GOLF, whether getting a lesson, playing 18-27-36 or more holes a day, or helping someone with their game - He was striving to be better and that spilled over into his everyday life and relationships. John was a tremendous people person - He had a boisterous voice. When he was in a room or area you quickly knew it! But if you told him something in confidence, he would keep it quiet. This scripture verse comes to mind when thinking of John and how he lived - Ephesians 4:32 “and be kind to one other, tenderhearted, forgiving one another, even as God for Christ’s sake has forgiven you “​

Memorial contributions may be given in memory of John to the Jerry Koverman Memorial Scholarship Fund.