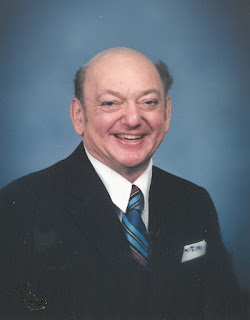 After graduating from Ansonia High School, Bill served in the United States Army Medical Corp from 1951-1953. He then went on to work at the FRAM Corp, where he met the love of his life, Kathleen, or as she was known to the Frammers at the time as "Hoppy". They both worked for FRAM for over 40 years, and even rode to work together for over 30 years. He retired from Honeywell with 41 years seniority in 1996. During that time, they had Robert, their only child. Bill was described as the “ultimate band parent”, chaperoning band trips and hosting large band parties at their home, while always supporting and encouraging Robert throughout the years.

He and the family loved to travel, and had visited most places all over the United States, and was fortunate enough to travel to Hawaii and Europe. One of his favorite places to visit was to sit quietly along a bubbling creek in Gatlinburg and listen to the world go by. It was very important to him to show his family as much of the world as he could, a lesson he learned from his parents. In all his travels he liked to sample the different varieties of food and was a "foodie" before his time.

Bill was an excellent roller skater and in his youth went skating almost every weekend. He always worked on keeping the family cars spotless, enjoyed gardening and just watching the "posies" grow. He will truly be missed. He is preceded in death by his parents, and his wife Kathleen “Kathy” Taylor in 2011.

He is survived by his son and daughter-in-law, Robert (Betsy) Taylor of Middletown, Ohio.

Friends may call on the family from 9:00 AM-10:30 AM on Saturday, February 1, 2020 at the Zechar Bailey Funeral Home, Greenville, OH. Funeral service to follow at 10:30 AM with Pastor Todd Reish presiding. Burial to follow at Greenville Union Cemetery, Greenville, Ohio where military honors will be performed by the Greenville Veterans Honor Guard. Memorial contributions may be made to State of the Heart Hospice. Online sympathies www.zecharbailey.com.