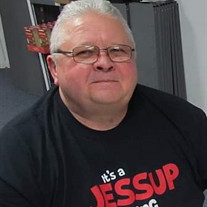 He was born on December 1, 1958, in Union City, Indiana, to Betty (Brodrick) Jessup of Union City, Ohio, and the late Robert Richard Jessup.

Paul was a 43-year career mechanic. He also volunteered with the Union City, Ohio Fire and Rescue department as a firefighter and EMT. Paul attended the Assembly of God Church of Union City, Indiana, and cherished his faith. He was an organ donor who loved his family and friends.

In addition to his mother, Paul is survived by his wife of 26 years, Jeannie (Engle) Jessup, whom he married on September 9, 1993; his son, Joseph Jessup of Versailles, Ohio; his daughter, Jennifer (Jacob) Beyer of Fort Huachuca, Arizona; his brother Robert (Deborah) Jessup II of Ansonia, Ohio; his grandson Evan Luke Beyer; and numerous nieces and nephews.

A Celebration of Paul's life will be held at 11:00 AM on Friday, February 7, 2020, at Calvary Assembly of God Church, 720 N. Plum Street, Union City, Indiana 47390, with Pastor Sonny Pettie officiating. Burial will follow in New Lisbon Cemetery near Union City, Indiana.

In lieu of flowers, Paul's family would like memorial contributions may be made to Calvary Assembly of God Church, 720 N. Plum Street, Union City, Indiana, 47390.