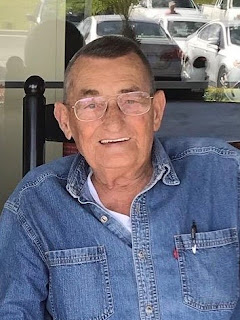 Jay LeRoy Scheiding, 82, of Lakeland, Florida, formerly of Greenville, Ohio passed away unexpectedly on Monday, February 24, 2020 at his home.

He was born on July 5, 1937 to the late Spencer and Dortha Scheiding.

In addition to his parents, Jay was preceded in death by his son-in-law, Richard LaFuze; his grandson, Craig Gengler; and his best friend, Rusty McWhinney.

Jay was a 1955 graduate of Westmont High School. He recently retired from Sam’s Club in Lakeland, as the maintenance supervisor. Before Jay moved to Florida, he was a prominent businessman in Darke County during the 1960s until the early 1980s. He owned and operated Jay’s Gulf and Jay’s Wreaker Service in Greenville. He also operated a truck stop and wrecker service in Lakeland for over 5 years. Jay was an avid race fan and enjoyed model trains. He enjoyed racing at Eldora Speedway and participating in the annual derby at the Great Darke County Fair.

A celebration of Jay’s life will take place at the convenience of the family.