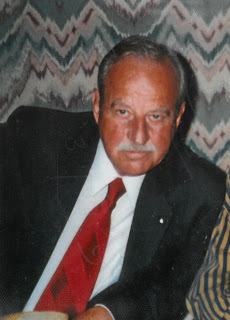 It is with great sadness that the family of Donald L. Powell announces his passing, after a brief illness, on Thursday, August 30, 2018 at the Brethren Retirement Community in Greenville, Ohio.

He was born October 19, 1925 to the late Reuben L. Powell and Viola (Shuff) Powell Armstrong.

In addition to his parents, Don was preceded in death by his step-father Gerald Armstrong; an infant daughter, Kathy Powell; his brother, Charles Powell; his half-brother, John Powell; his step-sister Mildred Armstrong Drew; his step-brother, Keith Armstrong; his beloved grandparents, Frank and Henrietta Powell; his aunt, Fhern Powell Grote; and his step-son, Robert Weng.

A proud Navy veteran, Don served his country from 1943 to 1946 on the U.S.S. Moore D.E. in the Pacific. His military service fostered his love of travel and he traveled the world, including many motorcycle trips across the country with his dear Greenville friends. Don never knew a stranger, always had a story to tell, and loved to laugh.

A private family memorial will be held at the Harris Creek Cemetery, Bradford, Ohio with full Military Honors conducted by the Greenville Veterans Honor Guard. He will be buried in the Powell family plot only two miles from where he was born.

We would like to extend our heartfelt thanks to: Wayne Health Care and staff for Don's wonderful care, especially Dr. Umeh; the care team at the Brethren's Home who gently cared for him; and State of the Heart Care who graced his final days with loving care.

Memorial contributions may be made to the Residents' Fund at the Brethren Retirement Community, 750 Chestnut Street, Greenville, Ohio 45331.

The family as entrusted Tribute Funeral Homes, Greenville Campus, with the arrangements.