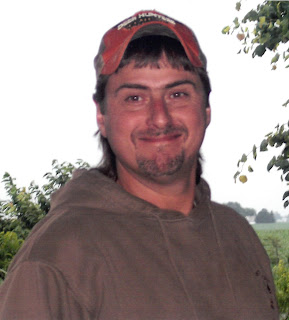 Steven Kent Lawrence, 50, of New Madison, passed away on Saturday, September 22, 2018 at State of the Heart Hospice Care Unit in Greenville.

He was born April 17, 1968 in Greenville to Delores (Enochs) Lawrence of Greenville, and the late Earl Kent Lawrence.

In addition to his father, Steven was preceded in death by his sister, Machelle Lawrence.

Steven was a 1986 graduate of Greenville High school. Following graduation, he attended a trade school for tool and die fabrication. He was a true outdoorsman. He enjoyed shooting sporting clays, target shooting and competitive shooting. He loved hunting, fishing, mushroom hunting, wood working and gardening. Steve also enjoyed almost any sport; he loved NASCAR, used to race motocross, and could even watch and enjoy a tennis match. Steve was a member of the American Legion and was the Son’s Commander of Post #245 in New Madison.

He had many passions, but none were more important than his family, his friends and his job. He and Kim would go on many vacations, traveling out west to hunt elk and turkey. He loved working with his hands in his machine shop at West Troy Tool and Machine. He was a caring man, a thoughtful friend, and his absence will forever be felt by all who knew him.

In addition to his mother, Steven is survived by his wife of 22 years, Kimberly (Hunt) Lawrence, whom he married October 21, 1995; his sister, Donna and Mike Hohler of Greenville; his brothers-in-law, Kelly (Karen) Hunt of Eldorado, Kent (Michelle) Hunt of Greenville, and Kevin (Lisa) Swanson of Lewiston, Idaho; his sister-in-law, Karla (Todd) Ellis of Arcanum; his special furry angel, Paisley; his nephews, Alex, Andrew, Adam, Gary, Landon, Tristan, Travis, and Joel; his nieces, Andrea, Morgan, Natalie, Hannah, Jersey, and Alivia; his great nieces, Caitlin and Chloe; and his great nephew, Landon.

A Celebration of Steve’s Life will be held at 3PM Saturday, September 29, 2018 at Tribute Funeral Homes, New Madison Campus, with Rev. Terry Haworth officiating. Steve-O was not a fan of dressing up and he would encourage everyone to dress as you would normally dress, just be comfortable.

Family and friends may visit Saturday from 1PM until the time of the service at the funeral home.