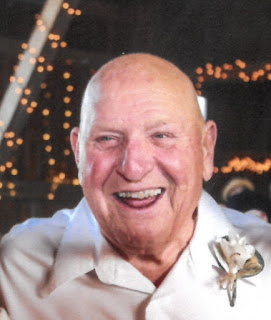 He was born April 12, 1925 in Ansonia, to the late George Louis, Sr. and Elise (Baughman) Klipstine.

In addition to his parents, George was preceded in death by his first wife, Joan (Black) Klipstine; his second wife, Treva (Curtis) Klipstine; his third wife, Sally (Wright) Clymer-Klipstine; and his son, John Louis Klipstine.

George was a 1943 graduate of Ansonia High School, attended the University of Dayton, and then served his country honorably in the U.S. Army. After serving his country, he returned to help his father run the family business, The Ansonia Lumber Company as a draftsman, salesperson and later becoming the owner. He was active with the Garst Museum, Liar's Club, Greenville Elks, Ansonia Fire Department, Ansonia American Legion, Ansonia City Council, and Ansonia Kiwanis Club...But he would have much rather been fishing.

George is survived by his son and daughter-in-law, Bill and Kim Klipstine of Versailles; his daughter-in-law, Becky Klipstine of Ansonia; his grandchildren and their spouses, Todd and Tammy Klipstine, Krista and Tony Spence, Kate and Clint Brewer, and Ben and Nicole Klipstine; his great-grandsons, Adam and Chance Klipstine, Trevor, Tanner, Trendon and Treyton Spence, and Mabel, Fred and George Brewer; his step-children and their spouses, Bryan and Aliana Clymer of Greenville, J.D. Clymer of Versailles, Lenny and Tina Clymer of Florida, Rene and Devon Wasson of Union City, Indiana, Connie and Jim Sink of Englewood, Ohio, and Teresa and Roger Fleckenstein of Versailles; his step-grandchildren and their spouses, Stacey and Aaron Johnson, Jennifer and David Dow, Holly and Chad Garrison, Dr. Brianne and Craig Galloway, Lindse and Josh Browner, Jesse Fleckenstein, and Kimberly Fleckenstein; his step-great grandchildren, Ryker, Daxton, Stella, Scarlett, Bodhi, Breylind, Kenyon and Rolan; and several nieces and nephews.

A Celebration of George's Life will be held at 10:30 AM on Wednesday, September 5, 2018 at Tribute Funeral Homes, Greenville Campus, with Pastor Bob Akins officiating. Burial will follow in Greenlawn Cemetery in Versailles.

Family and friends may visit Tuesday, September 4, 2018 from 4 to 7 PM at the funeral home.