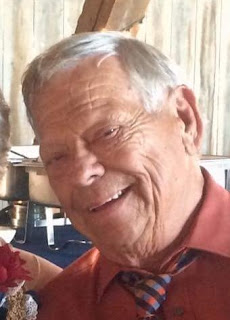 He was born on August 19, 1941, in Darke County, Ohio to the late Lloyd and Carol (Schlecty) Trittschuh.

In addition to his parents, Ted was preceded in death by his son-in-law, Todd Walls; and his granddaughter, Rebecca Trittschuh.

Ted was a 1960 graduate of Ansonia High School. He worked as a supervisor of logistics for BASF in Greenville for over 26 years until he retired in 2000. When Ted was not working, he enjoyed spending time at Long Lake in Indiana, where he and his family had a cottage for over 30 years. He had many friends in the area and cherished the time he spent there with his family. Ted also enjoyed garden tractors and tinkering with them. He and a group of tractor friends would travel to garden tractor shows all over and loved to share his passion with others.

Ted was a lifetime member of St. Paul’s Lutheran Church in Willowdell, Ohio until it closed in the spring of 2019. He then joined the Trinity Lutheran Church in Versailles, Ohio where he currently attended. He was also an active member of the Ansonia Masonic Lodge until it closed and continued his membership with the Gettysburg lodge. Ted was proud of his family and took great delight in the joys that he shared with them.

A celebration of Ted’s life will take place at 10:00 AM on Saturday, December 14, 2019 at Trinity Lutheran Church, 204 East Wood Street, Versailles, Ohio 45380 with Pastor Michael Althauser officiating. Burial will follow in Ansonia Cemetery in Ansonia.

Memorial contributions may be given, in memory of Ted, to the Hahn-Hufford Center of Hope, 1306 Garbry Road, Piqua, Ohio 45356.