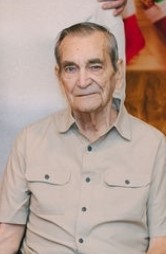 In addition to his parents, Ken was preceded in death by his daughters, Susan Ausbrook, and Deborah Howard; his son-in-law, Donald Howard; his granddaughter, Nicole Abernathy; and his brothers, Bethel and Ronald Abernathy.

Ken loved spending time outdoors and enjoying mother nature. He loved to go fishing, camping, and seeing new things all over the country. He and his wife, Janet, enjoyed traveling, especially to Florida. Ken liked to go square dancing with Janet and sharing his love for it with his family. Ken also liked to tend to his garden and maintain his yard.

Ken served his country honorably in the United States Air Force. He looked forward to the annual Air Force Reunions each year. Ken spent many years working for Natco in Richmond, Indiana, until he retired in the mid-1980s. However, he truly did not “retire”. Ken was an entrepreneur and started two different companies. Ken was a member of the New Madison American Legion, Post 245 and the Greenville Elks, Lodge 1139.

Guests may visit with Ken’s family on Wednesday from 4:00 PM until the time of service at 7:00 PM at the funeral home.

In lieu of flowers, the family request that memorial contributions be given to the State of the Heart Care, 1350 North Broadway Street, Greenville, Ohio 45331.