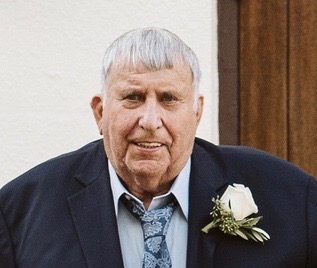 Floren (Chris) Christman passed away peacefully while visiting his daughter, Terri Wild, in her home in Miami, Florida on August 30th, 2020 at the age of 86.

He was born and raised in Galion, Ohio. Shortly after graduating from high school, he started a job that involved repairing railroad cars while they traveled. He met his wife, Myrna Brandt as the train came thru Versailles on a routine basis.  They eventually married and he settled in Versailles to start his career and family in the mid-fifties.

Chris was a very devoted husband and father.  He loved the Lord, his family and the beautiful land (farm) that he had in Versailles, Ohio. He owned a small construction company building houses and remodeling and farmed as well.  He was known for helping anyone at any time and for such a giving and loyal heart.  He just loved to be with family and friends, and everyone was welcome in his home. He did not know a stranger. He enjoyed the long summer visits from his daughter, Terri that would come to the farm often with the entire family during her summer break from teaching as well as the weekends that his daughter, Kim came over from nearby Indianapolis, especially to put out an exceptionally large garden and can tomato juice for the winter enjoyment. The pond on his farm attracted so many that enjoyed fishing, and he so enjoyed those that came to fish, even their big fish stories!

A showing will be held at the Ansonia Methodist Church on Friday, September 11th at 1 o’clock with a service starting at 2 o’clock.  He will be deeply missed by his family and friends. He has left us all with beautiful memories and the footprint of how to live a good life. Arrangements entrusted to Bailey Zechar Funeral Home, Versailles, Ohio. Online condolences www.baileyzechar.com.