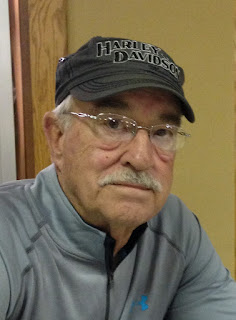 Richard Ray Skinner, 76, of Greenville, Ohio, passed away on Tuesday, September 1, 2020, at the State of the Heart Care Center in Greenville.

In addition to his parents, Richard was preceded in death by his brother, Larry Skinner.

Richard loved anything to do with the outdoors...hunting, fishing, boating, and camping. He and Barbara enjoyed many trips to Canada and traveling through Alaska with their camper. He was a huge gun and knife enthusiast and enjoyed showing off his collection. He worked extremely hard as a professional painter and took great pride in his work. He started Skinner Painting in 1965, when he was 18 years old, and continued until he retired at age 70. He was not shy about pointing out a job he had done somewhere along a Sunday drive.

He loved what he did, but he was never shy to try other things; like driving a truck, flying an airplane (private pilot), and butchering his own meat. He loved to read magazines and books about anything to do with history and was always fascinated by the Civil War. He never met a stranger and loved telling stories to anyone who would listen. He was a life-long resident of Darke County, which always had a special place in his heart. However, he loved to travel and see other parts of the country. He was a devoted husband, caring father, and amazing grandfather. He would do anything for his children and made it a point to never missed his grandchildren’s events.

Richard is survived by his wife of 55 years, Barbara (Houdeshell) Skinner, whom he married on January 30, 1965; his children, Rick Skinner and his wife, Kris, of Richmond, Kentucky, and Julie Skinner of Greenville; his grandchildren, Katelyn Skinner Hughes, Kyle Skinner, and Brayden Skinner; his sister, Kay White of Laramie, Wyoming; and several nieces and nephews.

A memorial service for Richard is being planned and will be announced at a later date. Please check back frequently for any updates.

Memorial contributions may be made to State of the Heart Care, 1350 N. Broadway Street, Greenville, Ohio 45331.

Online condolences and Hugs-from-Home may be shared with Richard’s family by visiting www.tributefuneralhomes.com.