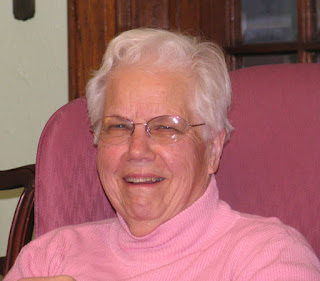 Esther (Petersime) Clark of Gettysburg passed away at the Brethren Retirement Community in Greenville on November 20, 2018.

Esther was born in Gettysburg March 27, 1936 to the late Ray and Bernice (Bigler) Petersime.

She graduated from Gettysburg High School in 1953 and Manchester College in 1957. She married James Clark of Brookville in 1963 in the Petersime Chapel at Manchester College. She spent the next 31 years getting to know Jim better and raising a family together until his death in 1994.

Sometimes referred to as “Mrs. Gettysburg,” Esther distinguished herself through a lifetime of service. Starting with Brethren Volunteer Service in Puerto Rico in the 50s, Esther also served with many other organizations (usually as treasurer). These include: Gettysburg Fire Department, Brethren’s Home Auxiliary, Gettysburg Village Council, Greenville Instrumental Boosters, Gettysburg Cemetery Association, and Friends of the Cardinal Center. As a lifelong member of the Oakland Church of the Brethren, Esther served as a deacon and was a dependable volunteer for church activities. Esther chose to serve even after her death by donating her body to the Boonshoft School of Medicine at Wright State University.

Esther spent most of her working years as a partner in the Petersime Incubator Company in Gettysburg. After the incubator company ceased operations in 2005, she worked as the Clerk-Treasurer for the Village of Gettysburg until her retirement in 2012.

Esther was a lover of music and encouraged her children to learn to play. She also enjoyed attending concerts and recitals and could without fail be found Sunday evenings during the summer in the Greenville Park listening to the Greenville Municipal Band.

After her own children were grown, Esther reveled in her grandchildren and great-grandchildren. No child would ever visit Grandma without finding a ready hug and an ample supply of cookies.

A Celebration of Life Service will be held at the Oakland Church of the Brethren on Saturday, December 8th at 11:00AM. Visitation with the family will begin at 9:00AM and continue until the start of the service.

In lieu of flowers, the family asks that donations be made to one or all of the following organizations: Heifer Project International, Brethren’s Home Auxiliary, or Greenville Municipal Band. Checks may be made out to Oakland COB (designate organization in memo), PO Box 198, Gettysburg, OH 45328.
Newer Post Older Post Home