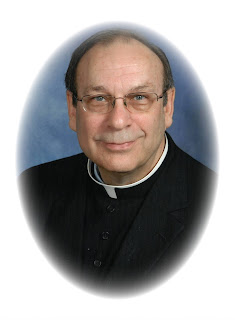 Rev. John René White, age 73 of Greenville, Ohio passed away Monday November 2, 2020.  He was born July 30, 1947, in Hartford, Connecticut, to John and Marie (Ulmschneider) White.  Father White had one sister Theresè, who died at the age of 7 from nephrosis. Also deceased are cousins Joseph Rene Ulmschneider, Helen Ulmschneider and Jeanne Ulmschneider.

Father White attended both public and Catholic schools.  He graduated from St. Michael’s grammar school, and Northwest Catholic High School, a school staffed by the Dominican Order.  He attended a local Community College and worked as a lab assistant doing biographical research.  He later graduated from Central Connecticut State College with a Bachelor of Arts Degree.  In 1977, he entered St. Mary’s Seminary Cincinnati, Ohio, where he received his Master of Arts in Sacred Theology.  On June 13, 1981 Father White was Ordained to the Priesthood, Archdiocese of Cincinnati, Ohio.

Following his Ordination, he served as Associate Pastor of Holy Trinity Church Coldwater, Ohio and Holy Angels Church Sidney, Ohio.  He then received his Masters and Licentiate in Canon Law at St. Paul University Ottawa, Canada.  He continued his career as an Associate Pastor in Residence at Our Lady of the Sacred Heart in Reading, Ohio.  For three years he held the position of Chaplain of Mt. St. Joseph Mother House, Sisters of Charity. From 1995-1998, he served as hospital Chaplain for Christ Hospital and Jewish Hospital.  In July of 1998, he was named as Pastor of St. Mary’s Church in Greenville, a position he held from July, 1998, until his death.

As a Canon Lawyer, Father White held various offices at the Tribunal for the Archdiocese of Cincinnati, including Vice Officialis of the Tribunal, Tribunal Judge and Appellate Judge for other Dioceses.

His favorite pastimes were traveling and collecting books, especially on history, biology, and of course theology.  He also enjoyed cooking, baking, woodworking and gardening.

Father White said the greatest influence in his life was summed up in the title of the book “The Love of Learning and the Desire for God.”  He always said his parents gave him the best advice by their example.  “To seek the Will of God and do it.”

To comply with the Covid restrictions A Mass of Christian Burial by Invitation Only will be held at 10:30 AM Thursday November 5, 2020 in the St. Mary’s Catholic Church 233 West Third Street, Greenville, Ohio with Archbishop Dennis M. Schnurr, Father Christopher Armstrong and Father Stephen Stanbery con-celebrants. The Mass will be Lived Streamed on YouTube at            St. Mary’s Greenville or by clicking on this link https://youtube.com/channel/UCFraS4HW1ZX3NYByNMNc0Ew

It was the wishes of Father White that Memorial Contributions be given to St. Mary’s Parish in Greenville.