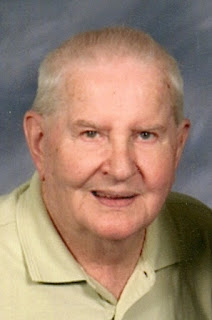 He was born July 12, 1932 in Dayton, OH, a son of the late Gene and Mary (Kreitzer) Bailey. In addition to his parents he was preceded in death by his wife, Joanne J. (Griffin) Bailey whom passed October 11, 2015; and a grandchild.

Paul was a Korean War veteran, serving his country in the United States Navy. He had retired from Corning, where he had worked for over 35 years as a press operator. He was a member of EUM Church in Greenville, America Legion, and Corning Retirees Club.

Celebration of Life will be held at 10 AM, Monday, September 26, 2016 at Oliver Floyd Funeral Home in Greenville with Rev. Sylvia McKibben officiating. Burial will follow in Miami Memorial Gardens in Covington, OH.

The family will receive family and friends at the funeral home, Sunday, September 25, 2016 from 4 to 6 PM.

The family request that memorials be given to State of the Heart Care, 1350 N. Broadway Street, Greenville, OH 45331.