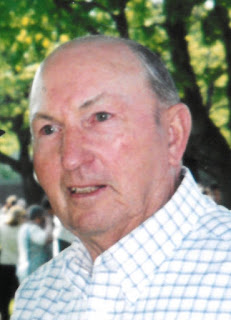 He was born Saturday, November 12, 1927 in Ansonia, OH, a son of the late Wilbur and Gertrude (Young) Henderson.

In addition to his parents, Bob was preceded in death by four brothers, George, Edmund, Raymond and Harold Henderson.

Bob was a WWII veteran, serving his country in the United States Navy, stationed in Washington DC. He was long time member of the Ansonia United Methodist Church. He was a member of the Ansonia American Legion Post 353. Bob was an avid card player, fisherman and golfer. He especially enjoyed spending time with his family and friends.

A Celebration of Life Service will be held at 1:00 PM on Saturday, September 17, 2016 at Ansonia United Methodist Church with Pastor Ron Hoeksema officiating. Burial, with full military honors provided by the Greenville Honor Guard, will follow in Greenville Cemetery.