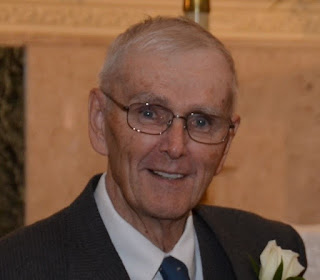 Dr. Thomas Richard Nealeigh peacefully entered eternity on February 10, 2018 after 92 ½ years of rich and positive living. Thomas was born July 27, 1925, the seventh of twelve children of Daniel and Bonnie Wills Nealeigh in Greenville, Ohio. He graduated from Greenville (Ohio) High School, Class of 1943.

Thomas served in the Army in World War, entering France on D-Day + 1. Following service to his nation he earned a bachelor’s degree and doctorate from The Ohio State University. He served as a mathematics professor for more than two decades at Westminster College, New Wilmington, PA. Retirement was spent primarily in Columbus, Ohio.

A service to honor the life of Thomas Nealeigh will be celebrated on Saturday, February 17, 2018 at 2:00 PM at Trinity Lutheran Church, 204 East Wood Street, Versailles, Ohio. Friends and loved ones are invited to greet the family from 1:00 to 2:00 prior to the service. Burial will follow at the Greenlawn Cemetery, Versailles, Ohio. Arrangements are under the direction of Bailey Zechar Funeral Home, Versailles, Ohio.