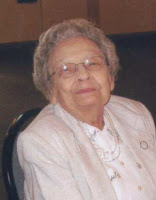 In addition to her parents she is preceded in death by her husband, Walter Enicks whom she married on October 19, 1942; and sister, Helen Davenport.

Annabel was a homemaker and a member of the First United Methodist Church and Greenville Area Dog Club. She enjoyed quilting and crocheting.

It is the wishes of the family that memorial contributions be given to State of the Heart Hospice or Brethren Retirement Community Resident Aid Fund.