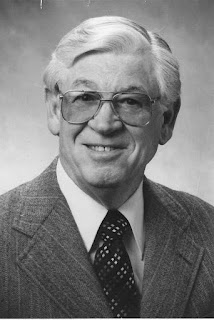 Glenn Hoke Brewer was born to Arthur and Katie (Hoke) Brewer near Bradford, Ohio on May 3, 1921. He graduated from Gettysburg High School in 1939. After graduation he worked at Petersime Incubator Factory and then at Wright-Patterson Air Force Base. He married Norma Waggoner on October 11, 1941 and began farming.

Mr. Brewer farmed full-time and worked winters at Ed Cornell’s Men’s Store until he became employed at Bradford National Bank in 1956. He attended the Ohio School of Banking and later became a loan officer. He retired in 1986 as a Vice President of Miami Citizens National Bank and was the manager of the Bradford Office. He farmed part-time during this time at the Bradford Office and continued to help farm during retirement.

A life-long resident of Darke County, Glenn was an active member of Oakland Church of the Brethren where he served in many capacities including Sunday School teacher, choir member, and deacon. He chaired the Fundraising Committee when the new church fellowship hall was built. He was a 10- year member of the Bradford Lions Club, was President of the Bradford Businessmen’s Association, and was a member of the Gettysburg School Board.

All who knew Glenn knew that he loved people, travel, and cars. He had several antique cars that he enjoyed driving with members of the Piqua Antique Car Klub. In May of 1984 he was selected to spend a week in Washington observing in the office of Congressman Tom Kindness. He also volunteered as a driver for the Brethren Retirement Community in Greenville.

Visitation will be held Friday January 22 from 5 to 7 p.m. at Zechar-Bailey Funeral Home in Greenville, Ohio. Graveside service will be held Saturday January 23 at 9:30 a.m. at Gettysburg Cemetery and a memorial service will follow at 11 a.m. at the Oakland Church of the Brethren, Gettysburg, Ohio, with Rev. Fred Bernhard and Rev. Bracken Foster and co-officiating. Family will receive friends at the church beginning at 10:30 a.m. before the memorial service.

In lieu of flowers the family requests memorials be made to either Oakland Church of the Brethren Memorial Fund or Cru (Campus Crusade for Christ). Condolences for the family may be sent to www.zecharbailey.com