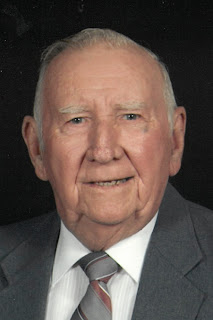 Robert was born Monday, June 28, 1926 in Darke County, OH, a son of the late Everett and Mabel (Schlechty) Grim.

In addition to his parents, Robert was preceded in death by a son-in-law, Jeff Burrell Sr. and an infant sister, Thelma Grim.

Robert served his country honorably in the U.S. Navy. He was a supervisor for United Telephone Company of Ohio for 37 years and also drove a school bus for Greenville City Schools for 10 years. He loved taking care of his yard and his roses. He was a member of the VFW and the Elks Lodge #1139 both in Greenville.

Robert is survived by his wife, of 65 years, Virginia (Pearce) Grim whom he married Saturday, December 8, 1951; son and daughter-in-law, Rodney and Kimberly Grim of Greenville; daughters and son-in law; Gail and Thomas Riegle of Arcanum and Carolyn Burrell of Arcanum; 8 grandchildren; 8 great grandchildren.

A Celebration of Life Service will be held at 10:30 am on Saturday, February 4, 2017 at Oliver Floyd Funeral Home in Greenville with Pastor Terry Cavanaugh officiating. Burial will follow in Oak Grove Cemetery in Fort Jefferson.

Memorial contributions may be made to First United Methodist Church in Greenville.