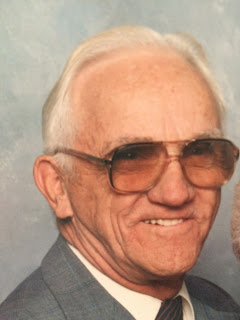 Bob was born on October 26, 1919 in Union City, Indiana, the son of the late Otto and Minnie (Reck) Bennett.

In addition to his parents, Bob was preceded in death by his wife, Donna Adine (Wilson) Bennett on November 17, 2007; his daughter, Barbara Ellen; an infant son; his son, William Bennett, and 6 brothers and sisters.

Bob served his country honorably in the Army Air Corp from February 9, 1942 to May 25, 1945 and gained the rank of tech sargent. Bob was a shipping foreman at Sheller Globe in Union City and retired after 30 years of service. Bob was also a grain farmer for most of his life. He and Adine loved to travel and made many trips around the globe. Bob spent many years on the Ansonia School Board and Wayne Health Care Board. He would attend all the events for his grandchildren recording them with his VHS camcorder. He enjoyed spending time at the Whistle Stop drinking coffee and chatting with his friends.

A Celebration of Bob's life, with full military honors conducted by the Greenville Honor Guard, will be held at 3 PM on Sunday, April 15, 2018 at Tribute Funeral Home, Greenville Campus with Pastor Gary Oser officiating. Burial in Beamsville Cemetery will be at a later date.

Family and friends may visit on Sunday from 2 PM until the time of the service at the funeral home.

In lieu of flowers, the family requests that memorial contributions may be given to State of the Heart Care, 1350 N. Broadway Street, Greenville, Ohio 45331.