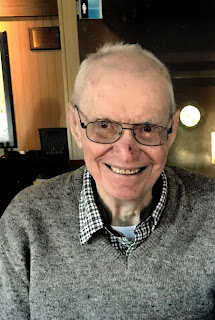 Don was born in Pitsburg December 31, 1928, to the late Merl and Kathryn (Condon) Kepler.

In addition to his parents, he was preceded in death by infant great-granddaughters, Stella Rose and Kendyll Dale Williams.

Don is survived by his loving and faithful wife of 70 years, Ruth (Blumenstock) Kepler, whom he married, September 9, 1950; his son, David (Dixie) Kepler of Pitsburg; his daughters, Beth Schrodi of Pitsburg, and Barbara (Duane) Denlinger of Farmersville, Ohio; his grandchildren, Ryan Kepler, Christina Ray and Tyler Schrodi, Leighanne Williams, Heather Schreyer and Vanessa Silvers. Don is also survived by his great grandchildren, James and Marcus Ray, Harper and Avery Schrodi, Nolan and Landon Williams, Wyatt and Luke Schreyer, and Brock Silvers; his brother, James (Jeanne) Kepler of Pitsburg; a niece, Melinda Meyers; a nephew, Mike Kepler; and many cousins and friends.

Don was a 1946 graduate of Monroe High School in Pitsburg. He was a former member of the Franklin-Monroe School Board and he served as clerk-treasure as well as a firefighter for the Village of Pitsburg. Many years ago Don and others were instrumental in forming the Pitsburg Little League. Don was a member of the AASR Masonic Valley of Dayton 32nd degree and a 60+ year member of Arcanum Masonic Lodge. He was a former member of Antioch Shrine Club of Dayton and the Darke County Shrine Club. He was a 41-year member of the Pitsburg Lions Club and was Governor of District 13-E, and Council Chairman for the State of Ohio Lions Clubs. Don was also a member of the Potsdam Church of the Brethren.

Due to the COVID pandemic, Don's family will be having a private memorial service, including a Lions memorial service, on Thursday, February 4, 2021, which will be available to be viewed remotely on our Facebook page, facebook.com/tributefuneralhomes, starting at 10:00 AM.

In lieu of flowers memorial donations may be made to the Pitsburg Lions Club Scholarship Fund, P.O. Box 93, Pitsburg, Ohio 45358.

Online condolences may be shared with Don's family by visiting www.tributefuneralhomes.com.