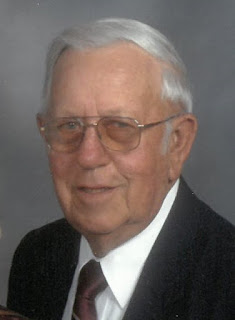 Joe R. Armstrong, age 93 of Greenville, Ohio passed away at 6:04 AM Sunday January 31, 2021 at the Village Green Healthcare Campus of Greenville.  Joe was born August 25, 1927 in Darke County, Ohio and the son of the late Ralph and Blanche (Hittle) Armstrong.

Joe was a Veteran of W.W. II serving in the U.S. Army stationed in the Philippines.  He farmed and raised livestock and always had a collie by his side, which he always named “Lassie”.  He loved working in his woodworking shop making toy farm equipment and looked forward to having Sunday Supper every week with his kids, grandkids and great grandkids.  Joe was a member of the First United Methodist Church of Greenville, enjoyed traveling and belonging to camping clubs.

In addition to his parents, he was preceded in death by his wife Bevva L. (Ross) Armstrong August 23, 2013.  They were married October 5, 1948.  Also a daughter-in-law Dawn Armstrong and sister Anne Lee Shuttleworth.

Private Funeral Services will be held at the convenience of the family in the Zechar Bailey Funeral Home Greenville, Ohio with Pastor Todd Reish officiating.  Burial will follow in the Abbottsville Cemetery.

It is the wishes of the family that Memorial Contributions be given to the State of the Heart Hospice of Darke County.