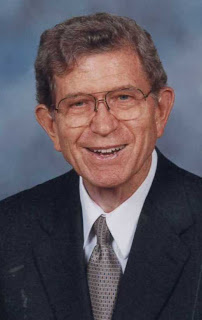 Mr. Pitsenbarger is survived by his son Gary Brian Pitsenbarger of Dayton; as well as numerous nieces and nephews.

In addition to his parents he is preceded in death by his wife Florence E. Pitsenbarger whom he married on May 23, 1954; brothers Nolan, Wilmer, Herbert and Robert Pitsenbarger; sisters Marjorie McGreevy, Mildred McEldowney and Gladys Rismiller.

He was a member of the United States Army serving in WWII. He was an active member at the First Presbyterian Church in Troy, Ohio, where he was a deacon and trustee. He was a 1944 graduate of Versailles High School, 1952 graduate of Ohio State University with a degree in Agricultural Engineering. While attending OSU he was in the Naval Reserve. He worked at the former Aero Products, Division of General Motors in Vandalia for 7 ½ years right out of college where he was involved in the development of propeller test equipment. He then worked at Wright Patt Air Force Base for 34 years before retiring in 1994 where he was involved with the design of test equipment for jet engines.

There will be a service held on Saturday, September 21, 2013 at 11:00 AM at First Presbyterian Church, 20 Walnut Street, Troy, Ohio, with Rev. Richard Culp officiating. Burial will follow in the Greenlawn Cemetery, Versailles, Ohio. Family will receive friends one hour prior to the service at the church. Arrangements are under the direction of Bailey Zechar Funeral Home, Versailles, Ohio. A Graveside Military will be conducted by the Versailles Veterans Honor Guard.

It is the wishes of the family that memorial contributions be given to the First Presbyterian Church in Troy, Ohio, or the American Heart Association. Condolences for the family may be expressed through www.zecharbailey.com