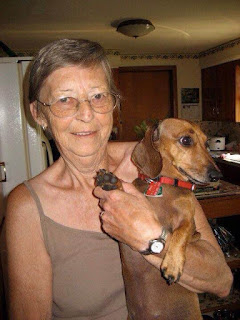 In addition to her parents she is preceded in death by her husbands, Franklin Cox, Marion Miller and Donald Hubler; sons, Ricky Cox and Patrick Miller.

Marilyn worked for Sheller Globe for 22 years and Corning Glass before retiring in 1997.

There will be a private graveside service held at the convenience of the family at Ithaca Cemetery, Ithaca, Ohio. Arrangements are under the direction of Zechar Bailey Funeral Home, Greenville, Ohio.

It is the wishes of the family that memorial contributions be given to the All American Dachshund Rescue, ℅ Melissa Chenault, 2150 Highway 64, Lewisburg, TN 37091.