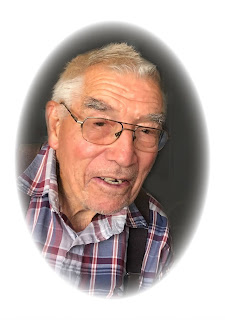 Roger Weist, age 92 of Greenville, Ohio passes away at 7:33 AM Wednesday June 9, 2021 at Wayne HealthCare of Greenville.  Roger was born January 4, 1929 in rural Union City, Indiana and the son of the late Fred and Bertha (Bentz) Weist.

He was retired from the Ohio Labor Union where he worked in road construction and a member of the Trinity Wesleyan Church of Greenville.  Roger was a veteran of the Korean War serving in the U.S. Army.  He was an avid car-racing fan, particularly Eldora Speedway races, enjoyed watching baseball, horse harness racing and was a huge fan of Indiana Hoosier basketball and football.

Funeral Services will be held at 11:00 AM Monday June 14, 2021 at the Trinity Wesleyan Church 1400 East Main Street Greenville, Ohio with Pastor Drew Bush officiating.  Burial with full Military Honors by the Greenville Veteran’s Honor Guard will be held in the Greenville Township Memorial Gardens.  The family will receive friends on Monday from 10:00 AM until time of the services in the Trinity Wesleyan Church.