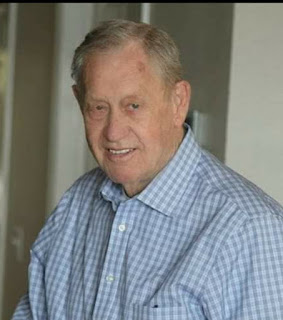 Billy Gene Buster, 94, of Union City, Ohio, passed away, peacefully, on Tuesday, January 12, 2021, in his home, surrounded by his family.

He was born on June 17, 1926, in Imboden, Arkansas, to the late William Hester and Anna (Johnson) Buster.

In addition to his parents, Billy was preceded in death by his wife, Margaret Alleta (Poe) Buster.

Billy was an honored WWII veteran serving his country in the United States Navy. He retired from the United States Postal Service in 1987 after many years of service. He belonged to the Radiant Lighthouse Church in Greenville and was a member of the Jayland Woodcarving Club in Portland, Indiana.

A celebration of Billy's life, with full military honors conducted by the Greenville Honor Guard, will be held at 11:00 AM on Monday, January 18, 2021 at Radiant Lighthouse Church, 5256 Sebring Warner Road, Greenville, Ohio, with Reverends Wes Lynch and Hershel Fee officiating.

Billy's family will be receiving guests on Monday from 9:00 AM until the celebration of his life at 11:00 AM. Burial will follow in Elwood Cemetery in Elwood, Indiana at 3:30 PM.

Memorial contributions may be given in Billy's honor to Radiant Lighthouse Church.

Online condolences and hugs-from-home may be left for Billy's family at www.tributefuneralhomes.com.