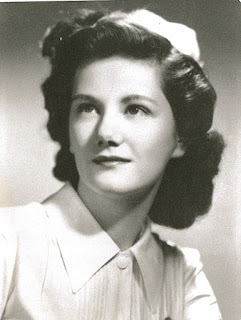 Hazel Naomi (Anthony) Harless, 94, passed away in Greenville, Ohio on January 3, 2021.  Born April 13, 1926 in Darke County she was the sixth child of Earl and Olive Anthony.  Hazel was preceded in death by her beloved husband Thomas M. Harless, her parents and her older brothers and sisters and in-laws, Reva Zimmers, Lowell Anthony, Evelyn Zimmers, Norman Anthony, Carl Anthony, and Mary Florence Strukamp.

As a youth, Hazel attended Midnight Elementary School on Folkreth Road then graduated from Greenville High School in 1944.  She attended Cadet Nurses Training at Good Samaritan Hospital in Dayton Ohio and graduated as an RN in May 1947.  She married Tom at St. Mary's Catholic Church in Greenville on July 12, 1947.  The couple had six children.

The family settled in Greenville until 1967 when they relocated to Dayton, Ohio. In October of 1977 when the children were grown, Tom and Hazel moved to Fort Lauderdale, Florida. In 1992, they moved up the coast to Satellite Beach, Florida, where they remained until a final move back to Greenville to live in the Brethren's Retirement Community in November of 2012.

Hazel not only had a long career as an RN but also earned her Teachers Certificate from Wright State University in 1964 and taught elementary school at St. Mary's School in Greenville and at St. Agnes School in Dayton.  She then went into hospital administration, which she continued until retirement in 1991.  At that time, Hazel took up painting and writing and produced dozens of canvases and four novels.  Hazel also had a beautiful singing voice and played the piano.  She and Tom loved to dance, entertain friends, and travel.

Mass of Christian Burial will be held at 11:30 AM Tuesday January 12, 2021 in the St. Mary’s Catholic Church 233 West Third Street Greenville, Ohio with Rev. Father David Doseck as celebrant.  The Mass will be Live Streamed on St. Mary’s Catholic Church Facebook Page.    Burial will follow in the St. Mary’s Church Cemetery.  The family will receive friends on Tuesday January 12, 2021 from 10:00 AM until 11:00 AM at the Zechar Bailey Funeral Home Greenville, Ohio.

It is the wishes of the family that Memorial Contributions be given to the Brethren Retirement Community Resident’s Aid Fund.